And another blow against illegal, Big Tech censorship!

In Gov. Abbott’s own words, take a look:

Now, a federal judge will let Texas seek internal documents about how they moderate content.

It’s about to get interesting.https://t.co/zYzf9HYqz8 via @technology

An *enormous thread* on alleged @Google @Facebook collusion based on the just-released *unredacted* complaint from the Texas AG. First filed December.

Anything PURPLE is newly unredacted.

Here’s a short blurb from Bloomberg:

A federal judge will allow Texas to seek internal documents from social-media companies regarding how they moderate content, as the state defends a new law restricting when platforms can suspend users.

The ruling allows Paxton to seek documents and depose employees at members of NetChoice and Computer & Communications Industry Association — but only if they’ll be impacted by the law barring platforms from suspending users over their political views. The statute, which applies to social-media companies with more than 50 million monthly users, takes effect Dec. 2.

Facebook has received over $146 MILLION in tax breaks from Texas taxpayers.https://t.co/7ETxXahXIj

Read this entire Tweet thread for the full story.

An *enormous thread* on alleged @Google @Facebookcollusion based on the just-released *unredacted* complaint from the Texas AG. First filed December.

Anything PURPLE is newly unredacted.

Google says “more daily transactions are made on AdX than on the NYSE and NASDAQ combined.”

Google also owns the largest buy-side and sell-side brokers. “It is pitcher, batter, and umpire, all at the same time,” says complaint.

Senior GOOG employee: “[t]he analogy would be if Goldman or Citibank owned the NYSE.”
More to the point — if NYSE was the only stock exchange 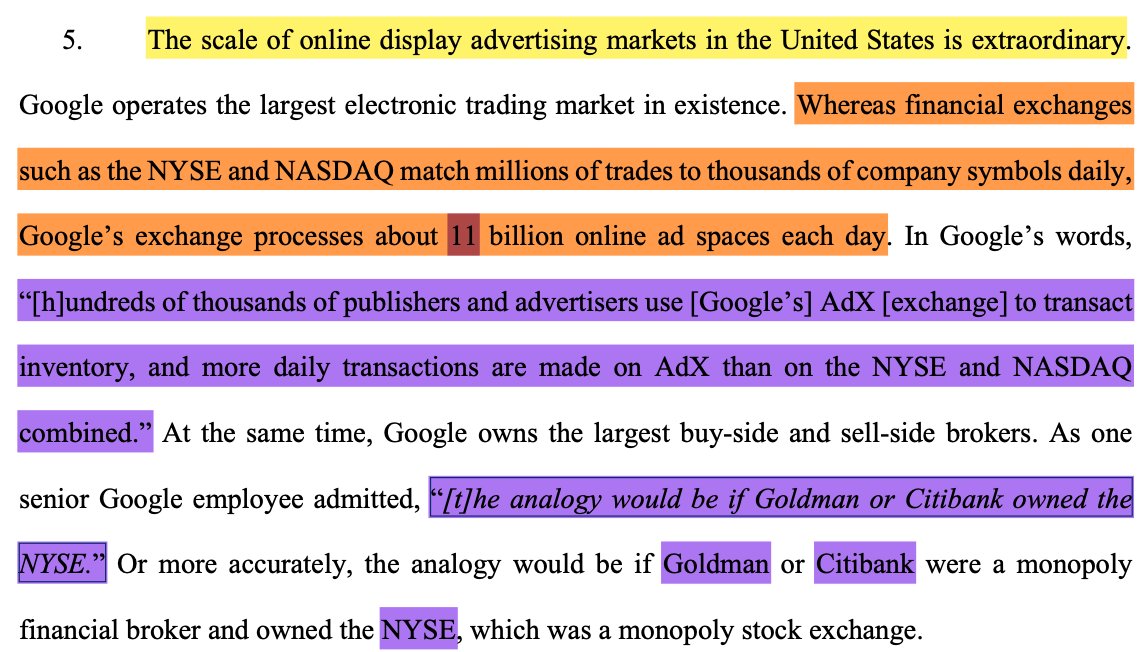 To respond, competitors came up with HEADER BIDDING: publishers could route ad inventory to multiple exchanges to solicit highest bid. By 2016, this was adopted by 70% of major US on-line publishers

GOOG to public: “Not at all” a threat to us
GOOG in private: existential threat” 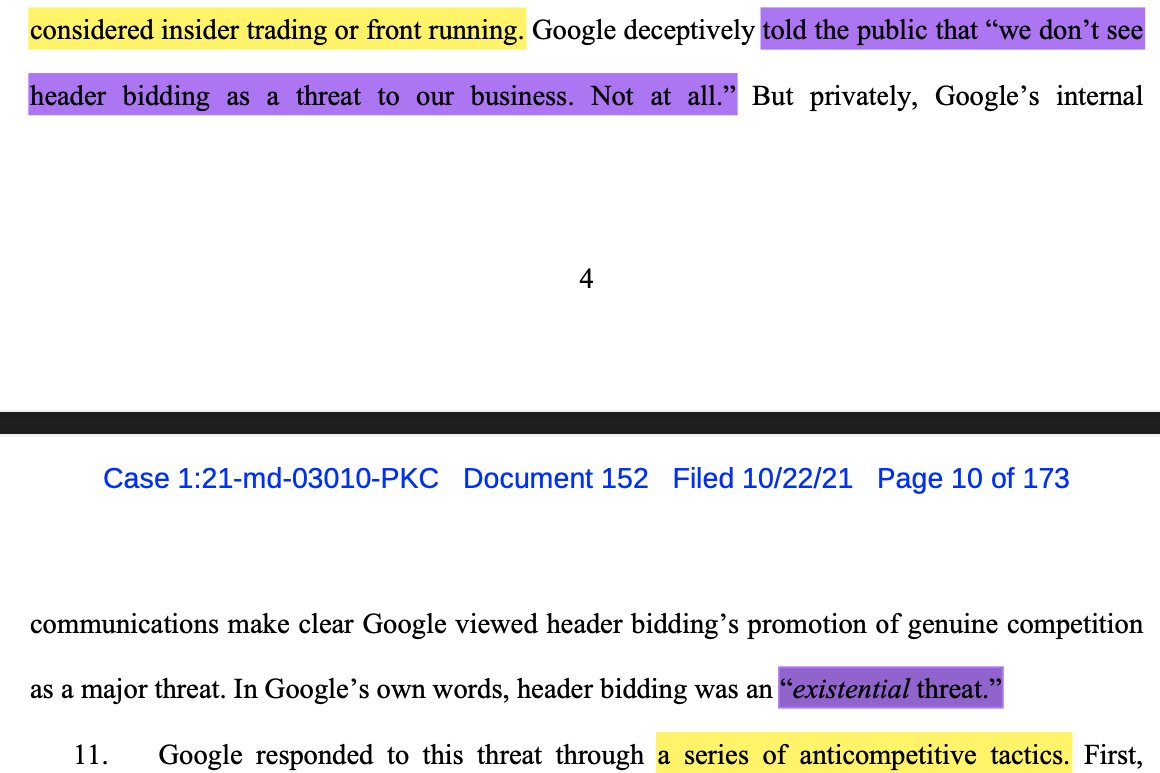 Google’s response – “secretly made its own exchange win, even when another exchange submitted a higher bid,” complaint alleges.

“Facebook communications reveal that Facebook executives fully understood why Google wanted to cut a deal with them: “they want this deal to kill header bidding.” 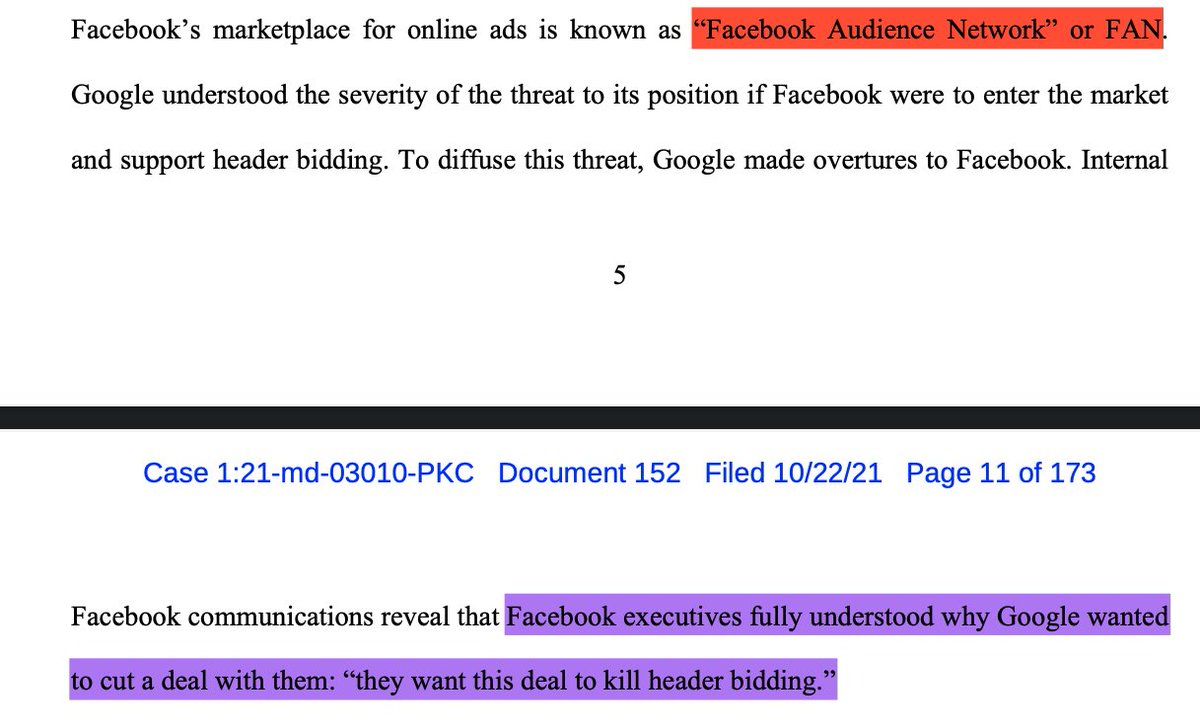 Google doesn’t want to compete with Facebook. Says it would rather “build a moat” by collaborating instead.

Google employees discussed “a Jedi mind trick” on the industry to cut off exchanges in header bidding.

“the open internet is now threatened by a single company”

+
“Google uses “privacy” as a pretext to conceal its true motives.”

Today, GAM controls over 90 percent of this product market in the United States.”

How much Google’s exchange charges:

“Google’s exchange charges publishers 19 to 22 percent of exchange clearing prices, which is double to quadruple the prices of some of its nearest exchange competitors.”

“exponentially higher than analogous exchange fees on a stock exchange.”

A Google employee conceded: an exchange shouldn’t be an immensely profitable business … (it should be) like a public good used to facilitate buyers and sellers.”

“Google internal documents suggest that Google’s share of the market* is eight times larger than FAN’s. 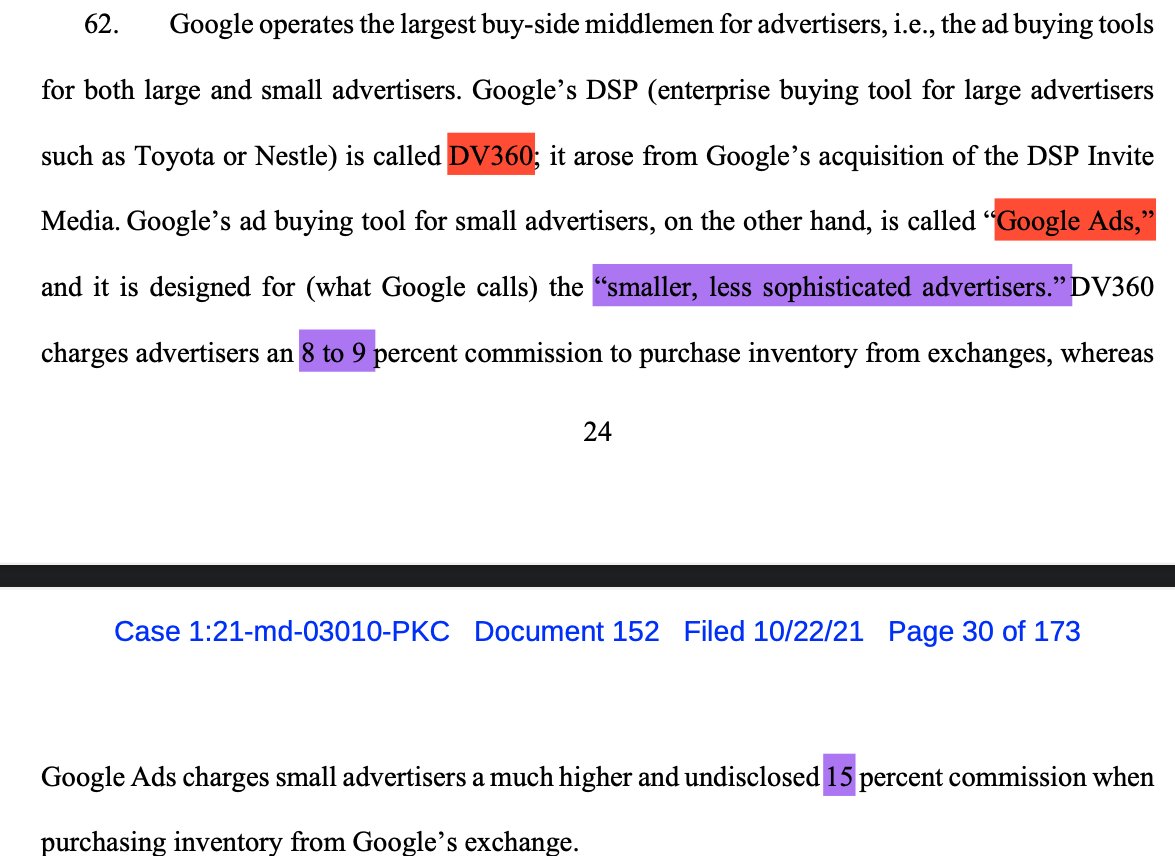 Google considered “creating a completely neutral platform like the NYSE,” they ultimately chose instead to stack the deck in their favor by owning the exchange. 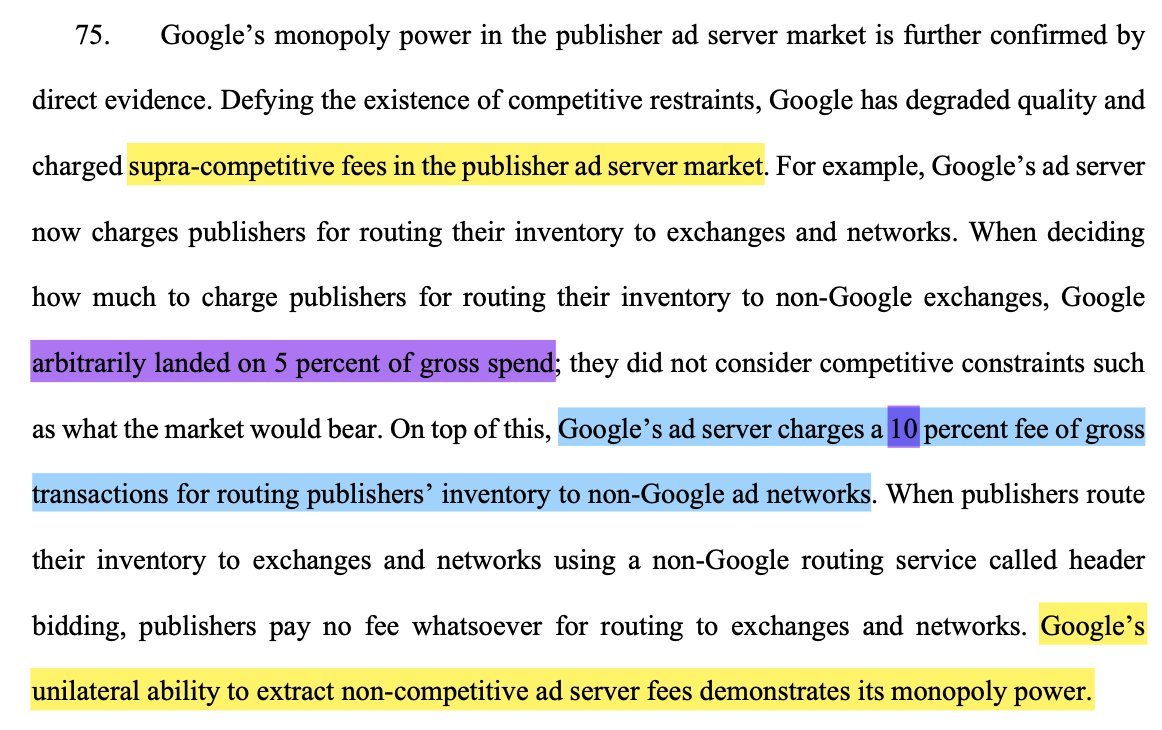 Google’s ad exchange held 60% share of all display ad inventory sold on US exchanges by Oct 2019. 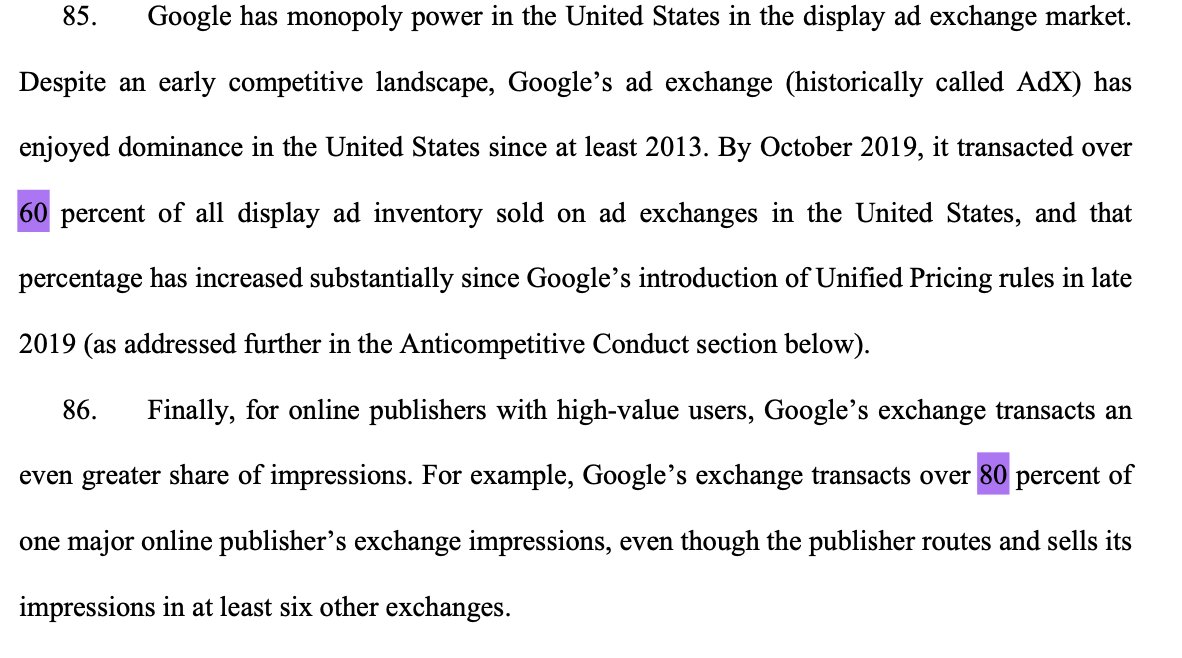 re Google’s monopoly power in the display ad exchange
market and charging “supra-competitive prices”-They are 19-22% of every trade, vs. closest competitors paying 5-15%.And still, smaller players can’t grow. 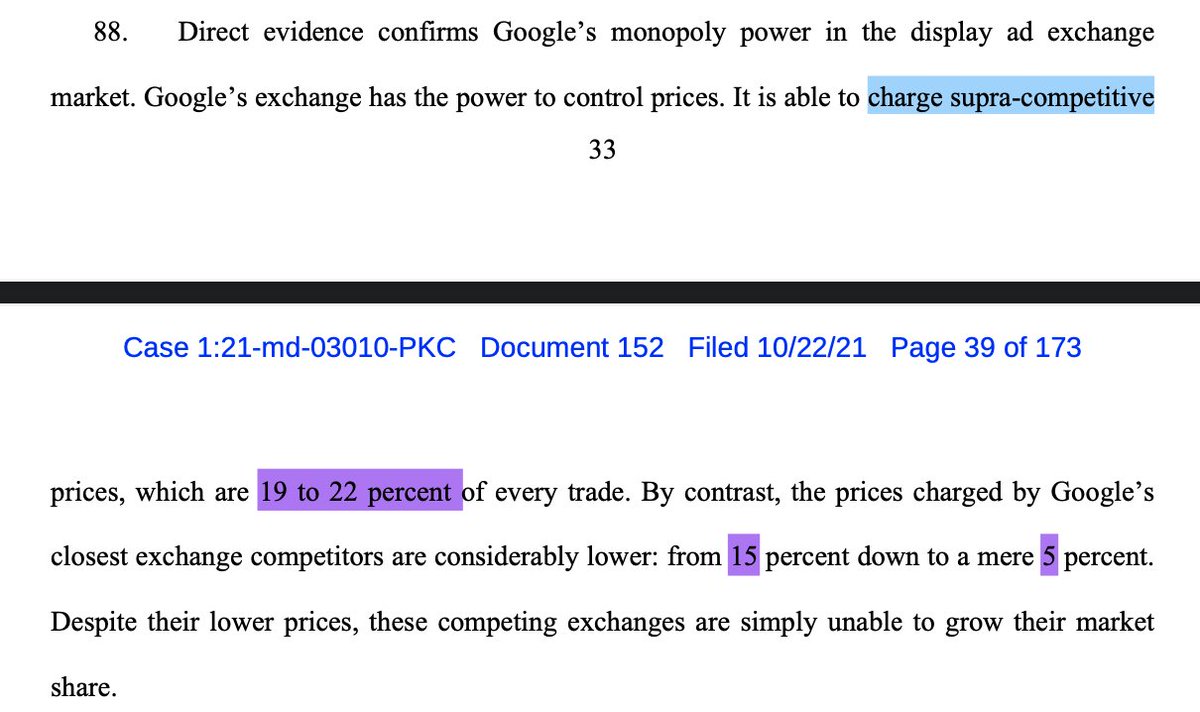 “Google has insulated its exchange from any of the competitive market dynamics that would otherwise incentivize them to lower their prices.”

“When rival exchanges attempted to gain market share by lowering prices in 2017, Google’s exchange maintained or even increased prices and still increased share. Competing exchanges have not been able to meaningfully increase share, despite some cutting take rates by half”

“GDN charges high double-digit commissions of at least 32 percent on advertising transactions, which, according to public sources, is double the “standard rate” elsewhere in the industry.”

Why does Google charge such high rates?

Because “we can,” executive said in 2016. “Smaller pubs don’t have alternative revenue sources.” 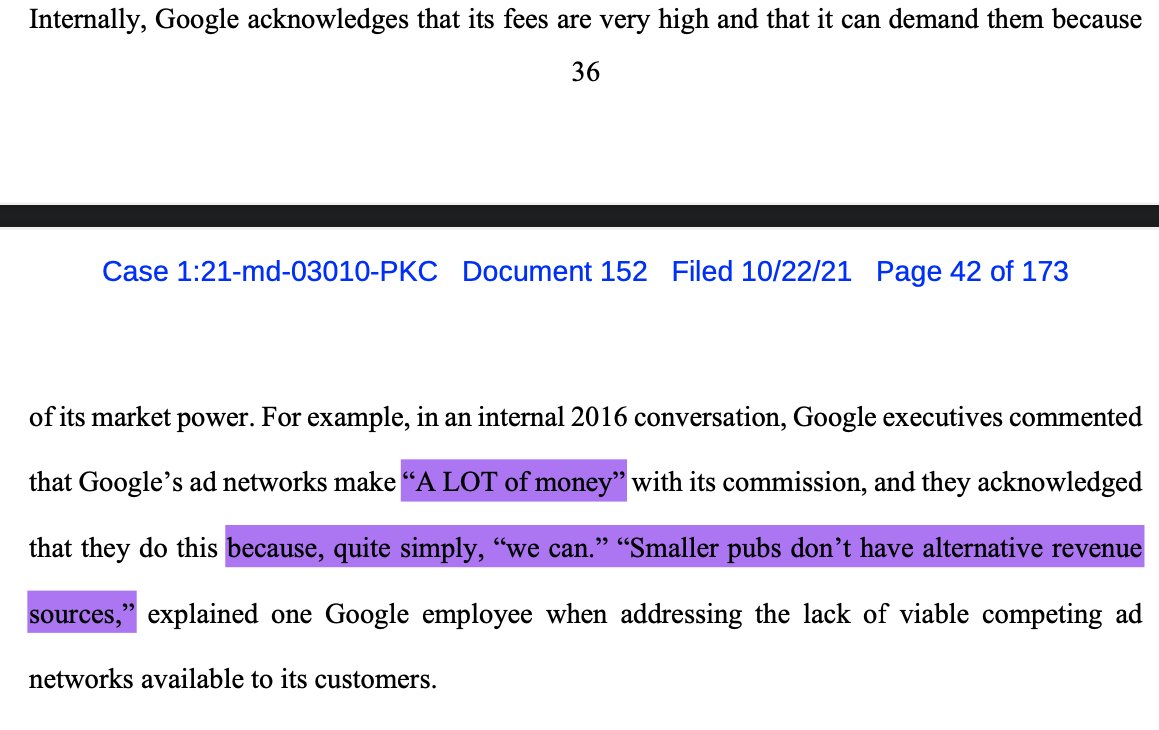 “Prior to Google’s anticompetitive conduct, the markets for ad exchanges and publisher ad servers were competitive….” 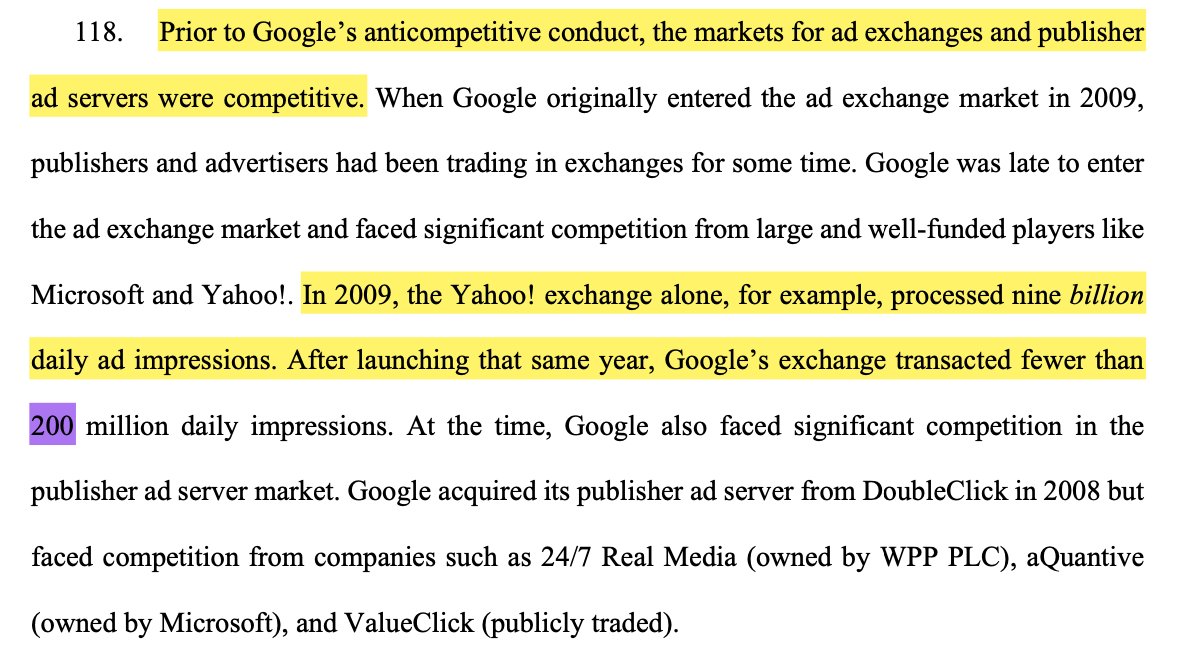 “GOOG monopolized the exchange and ad server markets by forcing publishers to license its ad server and trade in its exchange in order to receive bids from 1m+ advertisers
Google presentation, 2014: “AdX is the only platform with direct access to the entirety of AdWords demand.” 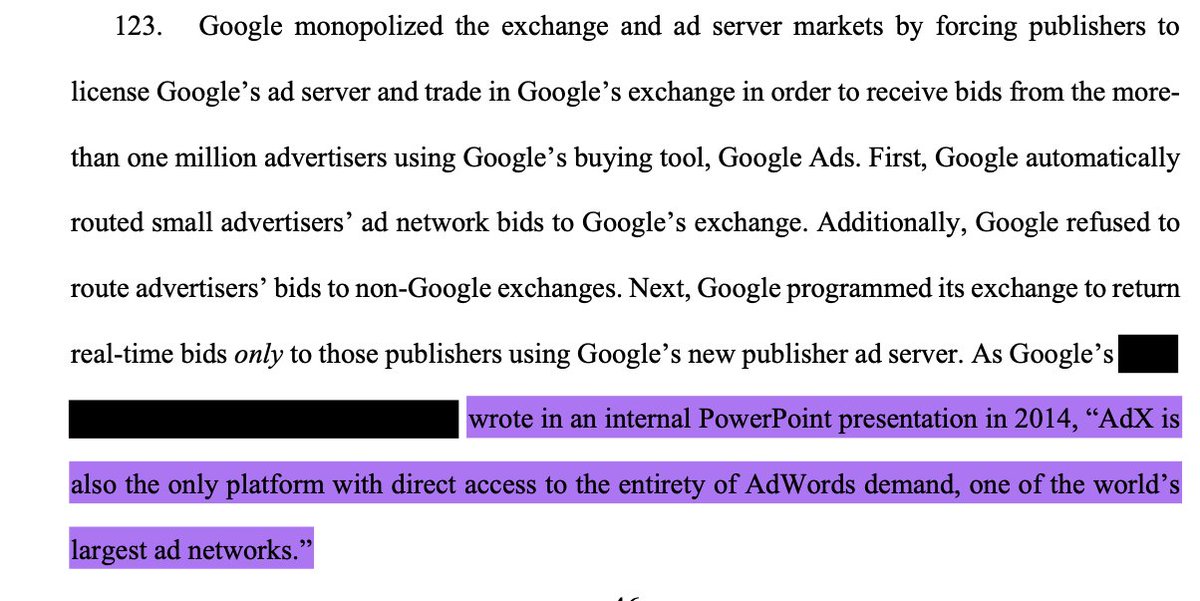 A bunch of unredacted material on Google’s gTrade team relating to how it allegedly manipulates bids without disclosing: 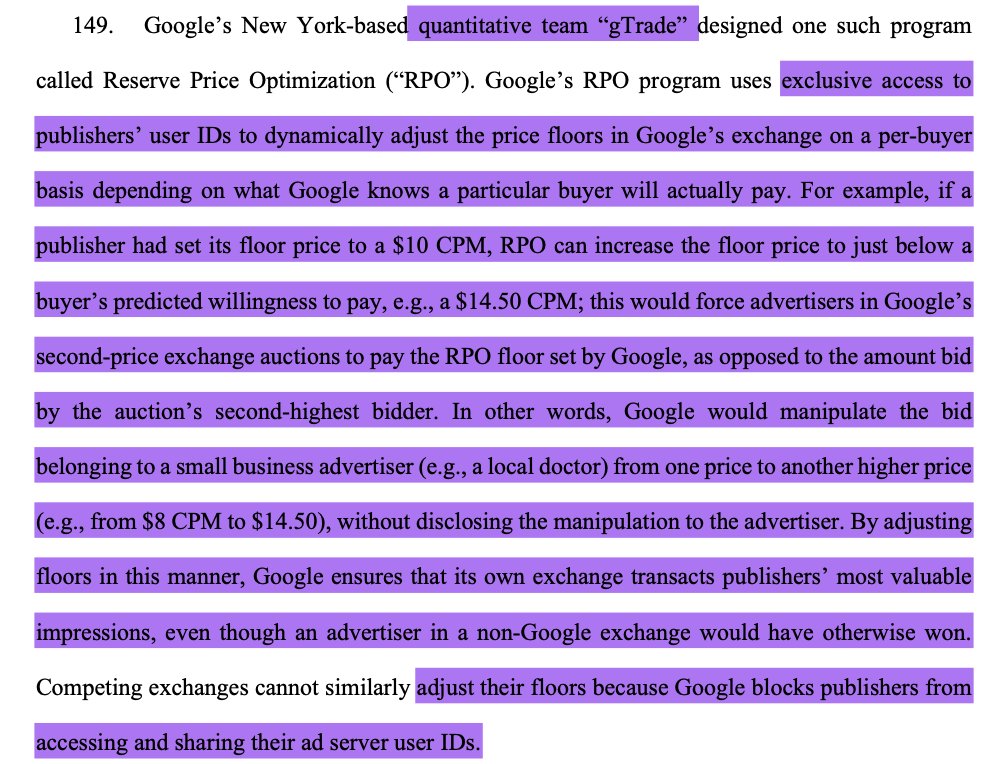 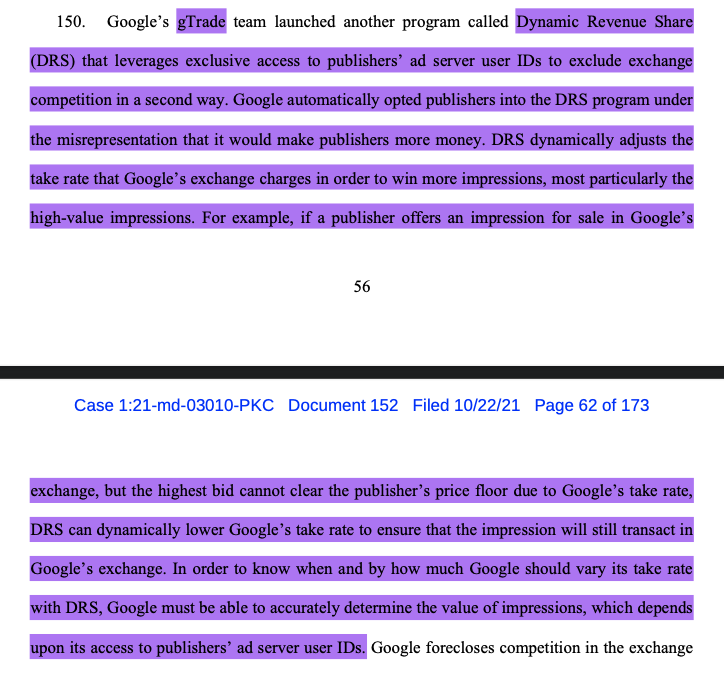 gTrade came up with Project Bernanke to use “privileged access to detailed information regarding what advertisers historically bid to help advertisers using Google Ads beat (competitors).”

This is how it works: 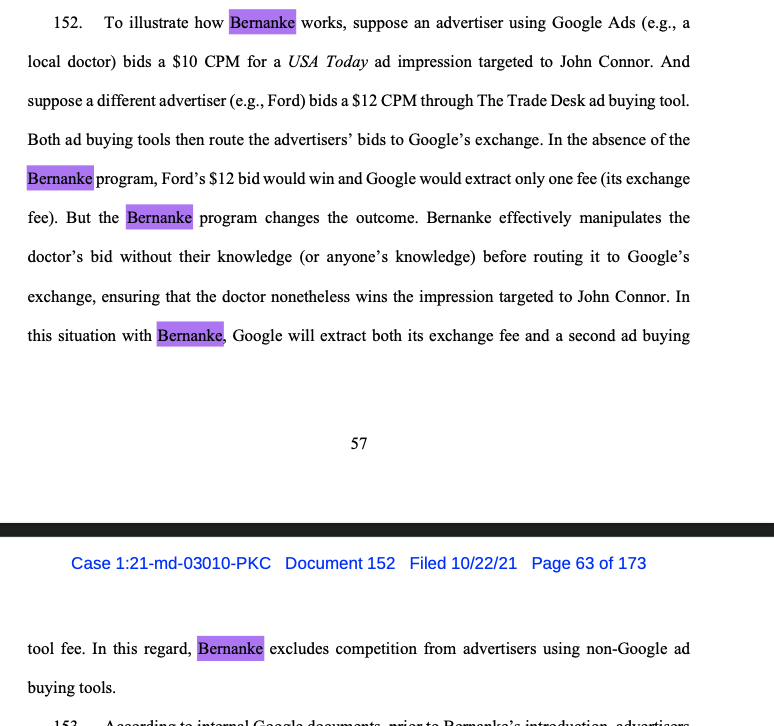 “Google’s idea with Bernanke was to trade on inside information…. Permitted Google to radically influence the amount of trading executed through Google Ads.” 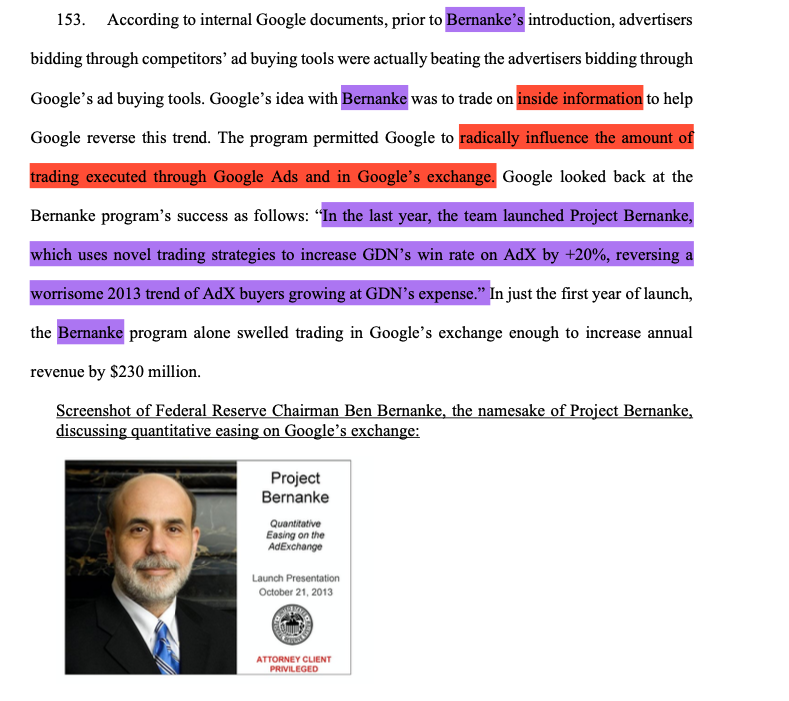 In 2015, Google signed agreement with WhatsApp to give users option of backing up their messages.

Users were led to believe they were encrypted. They were not. @MikeIsaac 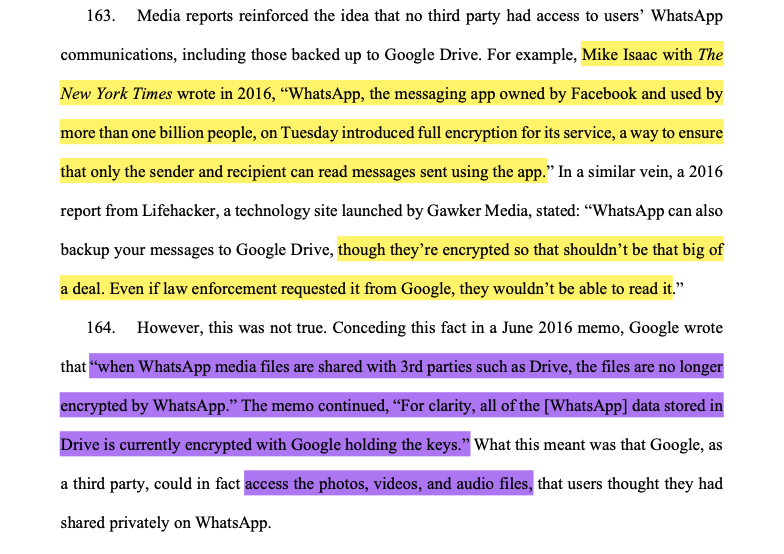 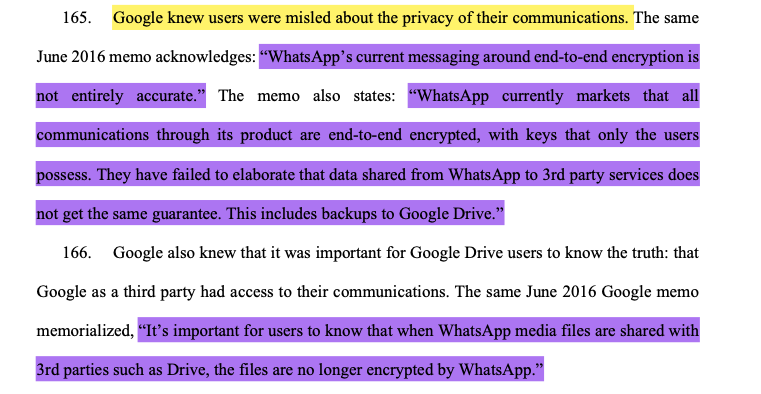 Google prep doc: “we have been successful in slowing down and delaying the [ePrivacy Regulation] process and have been working behind the scenes hand in hand with other companies.”

Google prep doc says aim was to “find areas of alignment and narrow gaps in our positions and priorities on child privacy and safety.”

GOOe expressed particular concern that MSFT was taking child privacy more seriously than Google and sought to rein in Microsoft.

“We’ve had difficulty getting FB to align on our privacy goals and strategy, as they have at time[s] prioritized winning on reputation over its business interest in legislative debates.”

AG: GOOG presents a public image of caring about privacy, but coordinates closely with Big Tech to lobby the government to delay or destroy measures that would actually protect users’ privacy. 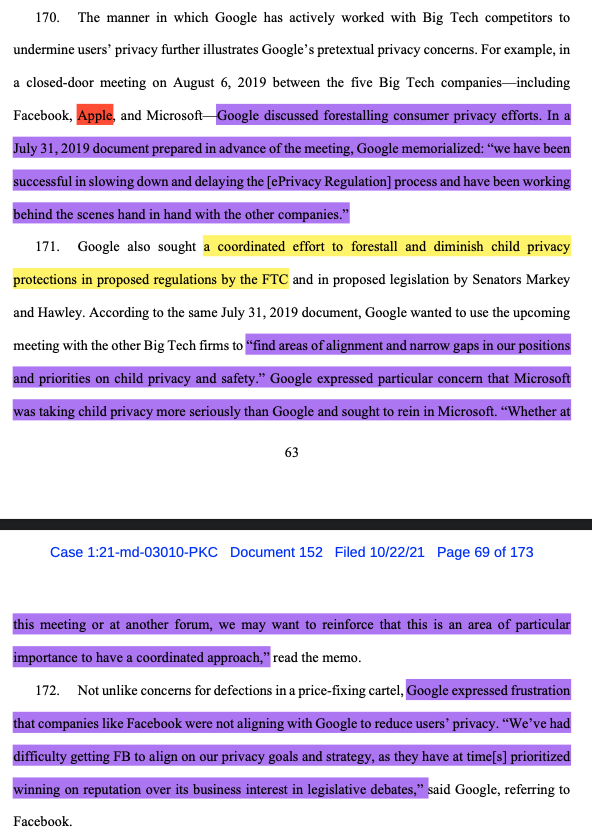 And…Ending this for now. Got other things to do, alas.

If you’re in this space, happy to share my PDF with all unredactions highlighted. DM me.

More insights in this thread:

And now we know what Google has been actually doing to slow down ePrivacy..

The unredacted documents between Google & Facebook @ https://t.co/VcPjUnUbXw are outrageous. There are going to dozens of important ad tech, digital privacy stories from all the details we can now see. https://t.co/YyE7aqdGlO